Communication in Game Design (part 3): Communicating with your Player


Last post on this subject for a while! In previous posts I’ve discussed communicating with your publisher and with your development team. As a game designer, the third group of people you have to communicate with are your players.

That is the most important thing you can do. Remember, everything the player knows about your game is learned through interacting with it. You can’t be there to explain your intent. You can’t ship a designer with every copy of the game to walk players through what you want them to do. Sure, you can make designer diaries online, post video walkthroughs or streams, but you shouldn’t rely on players having access to those resources.

What is Consistent Visual Language?

What do I mean by consistent visual language? I’ll give a few examples. 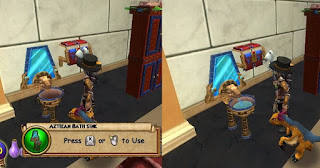 Take a look at this sink you can put in your home in Wizard101. You can interact with it, which will turn the water on and fill up the sink. It’s a pretty cool little feature that some of the housing items have. You know you can do this because a window pops up when you get close to the item, and it tells you that you can interact with it. That’s pretty clear.

What this also does is teach the player that if an item has a behavior you can trigger, you can expect to see a pop-up window appear. Now the player will check all their housing items to see if other items have similar behaviors.

What you have communicated to the player through this simple pop-up box is that:


Exploding Barrels From Every FPS Ever

Why are exploding barrels so prevalent in games? This is going to be familiar to anyone who’s played a first-person shooter from the past 20-or-so years. Let’s take a look at this barrel from Half-Life 2.  What can you tell me about it? It stands out from all the other barrels in the game which aren’t labeled. Even that tells you something, here is a barrel that is visually distinct from all the other barrels in the game. Your brain tells you that it should behave differently.

Your primary means of interacting with your environment in a first-person shooter is by shooting at things. If something looks different, you are going to shoot it. When you shoot at a normal barrel, nothing happens, so you aren’t going to waste limited ammo shooting at them anymore. But what happens when you shoot this barrel?

BOOM! It explodes. The explosion does several things.


You can use these barrels in interesting ways. You can lure enemies nearby and then detonate a barrel when they are within range. You can shoot a barrel to clear out obstructions. When you enter a new area, you will scan the area for these barrels to see how you can use them to your advantage.

What is absolutely vital here is that whenever you see one of these barrels, it behaves the same way every time. If you run into some barrels that don’t explode when you shoot them, it will be confusing. The blast radius and level of noise should always be the same. I played a game several years ago that was full of industrial pipe work. I learned early on that they were simply background visuals. Shooting them did nothing. Okay, so I understood that they weren’t something in the environment that I could affect. But then I saw the red shut-off wheel. That stood out. Surely it did something?


Nope. Just another background visual that did nothing. For several levels I ignored them just as all the other pipework.

But then I got stuck. I couldn’t find my way out of a level. Where was the exit? I ran around that level for a long time, seeing if somewhere I had overlooked a door or hallway or something to get me out. Nothing.

Finally, by blind luck, I happened to walk close to one of these background red wheels and suddenly there was an interact prompt. What? The game had been teaching me up until now that these were not something I could use. Now I had to use one?

And that was the only time (that I can remember) that I used one in the game. But now I had to waste time in each subsequent level making sure that none of them were interactable. This is an example of the games visual language failing to communicate to me the proper way of interacting with my environment.

Level Design in the Uncharted Series

One of the best examples I have ever seen in visually communicating gameplay to the player is in the Uncharted series. Their level design is just brilliant. (I should point out I have nothing to do with Uncharted in any capacity, I’m just a fan like many other players).

I grabbed some screenshots from multiple sources. Take a look at these levels. 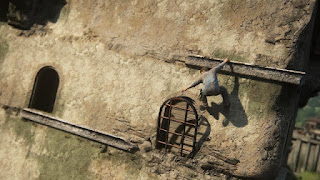 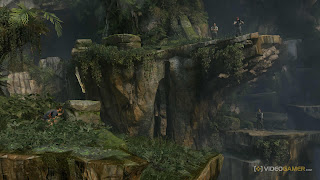 In each example, the environment looks fairly natural, but I can scan in an instant gaps I can jump, places where I can hide or take cover, ledges I can grab and shimmy across. And I can be confident in these assessments because the game has taught me I can use these objects in my environment in these ways. I know how far I can jump, what I can or can’t use. I can plan a path through the area. They use consistent visual language.

There are many other ways to use visual language to communicate your design to players. I’m sure I’ll talk about some more eventually.