So You Want to be a Video Game Designer?


I am often asked for advice on how one goes about becoming a video game designer. Admittedly, it’s a great job. I design and play games for a living. My job is to create fun experiences for players. Many students want to know what they should study to get a job like this. So how does one become a video game designer?

First off, let me dispel a few myths.

No one is going to make your game for you

Making games is a team endeavor

There are a lot of disciplines that go into making a game. See this chart I put together: 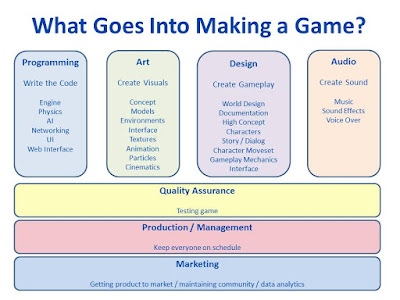 Each one of these areas needs to be addressed when making a game, even if it’s just to consciously decide not to include it. On a small project, one person can perform multiple roles. On large projects, you may have multiple people working on each area.

I’m going to focus my comments specifically on what you need to do to become a game designer. For these other disciplines, in general:

Did you notice the re-occurring theme? Go to school, get a degree.

Get to It Already

Now that I got that out of the way, let’s assume you want to know what steps you need to take to learn how to make your own games and to start a career designing games. What do you need to do?

It’s not an easy question to answer. Qualifications for a designer aren’t as cut-and-dried as video game artists and programmers. The duties and responsibilities of artists and programmers are fairly standard from studio-to-studio, and it is much easier to define what skills and abilities are necessary for those positions. But the responsibilities and duties of game designers vary widely from studio-to-studio, and it is much more difficult to nail down exactly what skills a designer should cultivate and study.

But I do have suggestions and recommendations. Bear in mind that there will always be exceptions to my list here, but these things are what I feel are important.

There was a time in the past where you could work you way up through the testing department, or come in as a creative idea man, but I think those days are past us now. First off, game testing isn’t just the stepping stone it used to be, it’s a viable career path in the industry. Game Designers could be solely the guys that had the ideas for the games, wrote all the documents and explained their vision to the team. But now everyone on a development team has great game ideas.

Good ideas aren’t enough to be a designer.

What more do you need? A degree is a good place to start.

What degree do you need? There isn’t a single answer. I have worked with designers with English degrees, Archaeology, Biology, History, Computer Science, Art, the list goes on. I have a degree in Art focusing on Graphic Design. Basically you need to prove you can complete a college degree and couple that with your design skills.

There are several schools out there that offer degrees in Game Design. You do not need a game design degree to be a game designer. Keep in mind that the turnover rate in this industry is atrocious. I don’t have the exact figures, but I have heard something along the lines of 3 out of every 5 people that enter the industry will be burnt out or have left the industry within 5 years. So the odds are, within a few years you could be out of the industry. Just keep that in mind if you are looking to earn a specialized degree.

There are some accredited schools that offer degrees in video game fields. USC has one through their film school. The University of Utah has a great program. There are others. I recommend getting a legitimate degree through an accredited four-year school. Get a degree in art or computer science, English, whatever. A degree that will be useful should you ever decide making games is not for you. And I think a person with design skills that can program in C++ or can build models and animate in Maya has a lot of options in front of them.

Not all designers have degrees, but I think it’s important. I could have never landed my job working in if I hadn’t had a degree. It just gives you more options, and I’m in favor of a well-rounded education. My own personal path was kind of convoluted. I started with a Major in Architecture. I decided it wasn’t the career for me. So I switched majors to English. I did that for about a year and a half. I dropped out, changed schools and started again with a major in Graphic Design. Yeah, I wasted a lot of time in school, but I finally found what I really wanted to do. And I use all of those skills in my daily routine.

If you really want to be a game designer, though, having a degree in hand may not be enough. Which leads to my next point.

An artist can show a portfolio. A programmer can write some lines of code. But what can you do to show that you’re a good designer? Everyone has great ideas for video games. There’s no shortage of great ideas for games. A designer needs to show that he can create a great game to completion. The best way to do that is to make games.

Learn some level editors (level editors ship with several games, like Unreal, Quake, Far Cry and more). After you’ve mastered the level editors, make some levels and post them out on the net. Prove you know what you’re doing. It doesn’t just have to be a First Person Shooter either. Make a mod for Minecraft, or a map for your favorite real-time strategy game. Get it out there for people to play. This shows that not only can you design a game, but that you also have technical skills. Many developers use proprietary software anyway, so the specific program you learn isn’t necessarily important.

There are several game engines available too. Unity is a widely used game engine you can download for free and learn on your own.

It doesn’t have to be a digital game either. Make a role-playing game, card game or board game. This is also what helped me land my first job. I was working on an RPG, and turned in some chapters as samples of my work. This demonstrated I understood game mechanics, documentation and I knew how to go about designing a game.

The barrier to publishing your own games has never been easier. Print On Demand services will allow you to print small runs of your game without sizable investments. Game engines and level editors can be downloaded for free. How-To tutorials can be found on YouTube and in forums dedicated to game development.

In addition to level editors, be familiar with as much software as you can. I regularly use Word, Excel, OneNote, Visio, PowerPoint, Photoshop, Illustrator and others. I tinker around in Blender and Unity. Some designers use a lot of sound editing tools, or video editing software. The more you can familiarize yourself with the better.

Not only the current hot games, but have a good knowledge of the history of games as well. Many design challenges you face in a game have already been solved in numerous ways by earlier games. Look at how they have handled a particular aspect of the game. Also, if you know your games, you won’t detail this great new idea you have for a game that revolves around a plumber wearing red overalls that jumps over barrels thrown by a giant necktie-wearing gorilla.

5. Know How To Communicate Clearly

As a designer, you will be responsible for conveying the design of the game to the rest of the team. You need to be able to do this through documentation. You need to be able to explain things verbally. You will be giving presentations to large groups of people. You will trying to convince a publisher that they want to spend $5 million dollars on your idea, and you had better be able to clearly explain why. You will be the one getting the rest of the team excited about the scope of the game. If you cannot get your ideas across clearly, there will be confusion on the team and precious time will be wasted.

Practice your public speaking. I have to stand up regularly before large groups of people for all kinds of reasons. I give pitches for potential new projects. I explain to large teams of artists and programmers what is intended in the current game in development. I give updates to the publisher on the progress of the game. I explain to marketing what is cool about a game or potential project.

6. Have Hobbies and Know Your Pop Culture

This may sound weird, but knowing about the current popular trends in media and entertainment is vital to your role as a designer. Knowing what movies and television shows are on the horizon can influence design decisions.

I have to be ready to craft game proposals in a very short time. It really helps if you already know something about the subject. I was always the comic book and sci-fi guy of the designers I worked with. Any time a license came through on those things, I would get asked to do write-ups for them. Other designers were the sports guys, or the history guys, or RTS guys. But the more you stay current on what’s popular in our culture, the better you will be able to craft games that appeals to players. I keep track of movies coming out, comics coming out, TV shows, books, kids shows, toys.

And if you don’t know something, know how to research it. You’d be surprised how useful it becomes simply to know how to find information online or – heaven forbid – at the library.

Cultivate hobbies. Find things you're passionate about and figure out ways of communicating that passion through games.

If you do all these things I’ve listed, I think this will give you a good start on becoming a video game designer. Of course, if you ask a different designer, they may give you a completely different set of suggestions, some of which may be in direct opposition to what I’ve just said. But that should be part of the process too, find out information from a variety of sources. Build some skills and let your natural talent shine through. Hopefully you’ll be making the video games I will be excited to be playing in a few years from now.

David  aarons said…
It's a nice article, which you have shared here about the game. Your article is very useful for those who are looking to Trade Video Games Online. I would like to thanks for sharing this post here.
12:41 PM